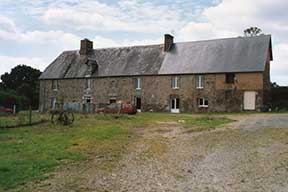 French auctions are a bit different to English   ones.

All bidding is done by a lawyer. Each bid has   a time limit of 90 seconds for the other party    .to raise their bid, if not your bid wins.

The other thing I noticed was that the Judge    .was a woman. The lawyer for the bank was a woman.

And 4 of the other 5 lawyers in the tribunal were women.. seems like the legal profession in France is dominated by women..

Making assets work for you

Which has come as a bit of a shock to be honest.

So the plan is to renovate the house we have just bought with 4 bedrooms and a games room.

Create some seminar and exercise rooms. Create a fishing lake. Rent the land out and maybe stock it with deer (we have wild roe deer already) and possibly boar.

Expand the wood and manage it properly.

We reckon we can make about £20,000 a year before taxes and heating etc on an investment of

(So look forward to there being an elite mastermind in france in 2016 !!)

Whilst I was in America one of the buzzes was about advertising on Twitter, but I couldn’t find anybody actually making money through twitter advertising.

Now the interesting thing is Back in 2009 the buzz was all about free traffic from Twitter. Every seminar you went to there was always somebody selling some sort of software to automatically get you tons of traffic using Twitter.

I remember attending one of these events, taking loads of notes rushing home and purchasing the Twitter software, and then I went out and purchased 5000 Twitter accounts.

To cut a long story short, yes it did generate an absolute ton of traffic however nobody bought anything and it all ended up being a big waste of my time and money…..

Last week I was going through my notes which I took whilst in America and I remembered that Twitter advertising thing that people are talking about.

So Monday I set up a Twitter advertising campaign just really to see what would happen.

So far my results have not been great, I’ve been sending the traffic directly to one of my squeeze pages. It’s been costing me around $10-$15 person that joins my email list which is mega expensive, and so far no one’s bought anything.

I will carry on my testing for another week and try and tweak a few things to see if I can make Twitter advertising work.

I will let you know my results next week. But for the time being……

Yesterday evening I got back after a long day with one of my mentor’s. It was a  two-hour drive from Milton Keynes.I got home and sitting on the doormat was the latest release from Arrow video, the 70s classic…Rollerball.

I put the Blu-ray into my player and started watching the special features straight away. There are some fantastic extras including an interview with James Caan and a documentary about the making of the film.

Rollerball was made in the 1970s and predicted a world where corporations ruled the world and a central computer called Zero held and controlled all the information. And the information was suitably edited…

Watching the film now throws up a lot of questions, do corporations rule world? Is the computer zero actually Google?

It’s fantastic seeing one of my favourite old films in high definition for the first time, highly recommended.