A couple of weeks ago, my Tesla got pranged by one of the moving vans when I moved to France.

This is particularly annoying, as it’s such a beautiful car I find it rather embarrassing having a dent in the side of my car. 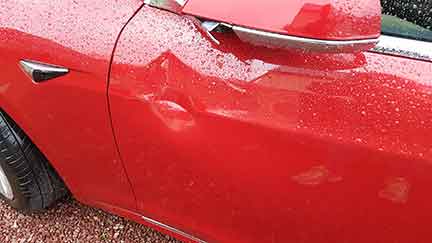 Anyway, I called up one of the Tesla-approved garages to get a quote on how much it will cost to fix this relatively small dent. Well, guess what?

It’s going to cost so much to fix because they have to repaint half the car!

The car is painted with something called a three-stage pearl paint, which apparently is incredibly difficult to colour match.

I jokingly said to Dave, who was sitting on the desk opposite me, “I bet he puts me on hold for 45 minutes,” and then I get cut off.

Dave said, “That is definitely a possibility.”

I thought I would use this time wisely.

I put the phone on speaker whilst the call centre played me some horribly annoying music.

I decided to use the time to change my address details on my driving license.

I’ve been putting this off for the last couple of weeks because I was expecting it to take forever, and be really complicated.

It only took six minutes?

Anyway, to get back to my call with the insurance company, guess what?

I was on hold for 45 minutes, and then got cut off.

I called them back. After another 30 minutes on the phone, I finally had my claim filed.

What’s the moral of this story?

As affiliate marketers there are loads of tasks we do which seemed to waste a lot of time.

One of the biggest time wasters for affiliate marketers is traffic generation.

What if you could get someone to drive the traffic for you?

Why not hire someone to drive the traffic for you?

I’d like to invite you to an online training class where I’ll show you exactly how you can outside traffic generation, and profit from that traffic.

Register here for the class 🙂

By the way: Miriam, my cat, is the mend. She’s walking again, just.