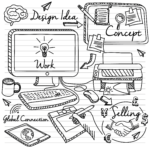 I would have sent this out yesterday but I was rushing around   trying to get ready for a meeting out of the office, and in doing   so hit my foot against the edge of a bookshelf and broke a    .few  toes and bruised my foot !

Can you be an Affiliate Marketer without a List or Paid Traffic ?

I was on a conference call the other day and this very question came up.

At first my reaction was to say “well yes.. but you won’t make much money at it”

Then I got to thinking.

When I started I didn’t use paid traffic – well not much – and not for every product I promoted as an Affiliate.

Some of you who have followed me since I started may remember the technique I taught where you created a review site that had in the domain name the name of an upcoming product being launched.

And where you got an advance copy of the product and did a review of it – a video review was the best – and posted that.

That got you the Google ranking and the free traffic..

When I did it it made me quite a lot of money and I know (because someone stood up at one of the very first workshops I ran and said so!) that it worked for others as well.

But it seems to me to be a good way to get people started, and also to get them to learn some of the basics.

So now I am thinking, maybe it would be a good idea to see if I can update that strategy and process, test it out, and make a training course for beginners teaching them how to do it ?

Being an Entrepeneur and Tunnel Vision

I know I have changed mentally in the last few years.

And a lot of this is to do with my mindset.

So the other day I was on the phone to my support people at Infusionsoft.

“Okay so I have made these changes and I have now got these 3 new products. They work like this and I am selling them like this, but what I now need is to have the product page in place and xxxxx and then xxxxx and it needs to interface with xxxx”

The reply was (and this is the short version !)

“You entrepeneurs are all the same, you create the product and launch it, and only then do you think about the back-end to support it”

And now I get Tunnel Vision as well.

It was only last week I was having a conversation with Dave.

He said “its great how we now have all these products but isn’t it about time you started driving your own traffic to your own offers ?”

“After all, your knowledge of what works, traffic wise, is a key thing that your customers want to know”

I was so focused on getting better products and creating a better product structure I had forgotten about driving my own traffic !

So earlier today I wiped my whiteboard clean and started writing out a plan of action with regards to traffic generation – check the photo below !

Okay, over the next two months I’m planning a massive traffic campaign and if you’d be interested in seeing some of the results do let me know.

Oh and bring husband/wife/girlfriend/boyfriend/son/daughter for half price.

This week In the Movies

I love films about whistleblowers, and uncovering the truth…

I find it incredibly interesting how undercover reporters reveal the truth and blow the lid on corruption.

This is a film I had been wanting to see for a long time. It’s all about uncovering allegations of child abuse in the Catholic Church.

This film is based on a true story and it’s a must watch.

In the Heart of the Sea 3D

This is a film about the true story that lay behind and inspired the book Moby Dick.

Since I had never actually read the book I was eager to see the film,especially since it was released in 3-D.

I have to say it’s not the best film I have ever seen nor is the 3-D particularly amazing.

A lot of the scenery was computer-generated, and as far as I was concerned it looked fake..

It was the kind of film that’s worth watching if it’s on TV but not really worth buying the DVD or Blu-ray, very disappointing.