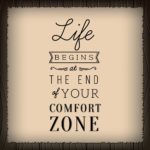 “The more time you spend outside your comfort zone, the      .more you will experience life.”

About what makes some of us seemingly stride ahead and make the most of life, and others apparently stay stuck and not risk expanding their horizons.

The sort of difference that makes some people feel their glass is half full, versus those that see the glass as half-empty.

Muhammad Ali produced lots of outstanding quotes but perhaps the shortest and pithiest, and one of my favourites, is “Don’t count the days, make the days count”

When I started internet marketing, Dave and others were interested but no-one really saw it as a serious career option.

When I started doing it fulltime, quite a few people thought I was totally insane.

But I made it work.

I guess I had the confidence in my self and my abilities to conquer the new, and the mental flexibility to work at it and make it work for me.

And recognising the small successes I had early on helped a lot.

Learn from your mistakes (and yes I made lots of those when I first started !) but don’t let them drag you down so that in your mind they overcome your successes.

I used to have a real fear of public speaking.

Not just large numbers… any group more than about 4  !

I was worried about my voice..

I was worried about how I looked..

But I was determined to do it ..

Partly because I knew I wouldn’t be seen as a serious Internet Marketer until I could do that, partly because I was not going to to let that fear win.

I was not going to let that fear win, I was going to beat it.

I enrolled myself  on a public speaking live workshop, wow I was so nervous ..

30 minutes before the workshop I was queasy  in the toilets !

I realised I was a lot better than others.

And my dyslexia wasn’t as much of a problem as I thought.

And when I finally did stand up in front of a crowd of people… it all went just fine.

Two weeks ago I was sitting at home thinking “shall I watch tv or go out and do something ?”

Sitting at home watching TV was the safe and comfortable option, something deep down inside me rejected it.

So I went to a Toastmasters (public speaking event) I was a bit nerves going to an event like this on my own but I had a great time pushing my limits !

Learnt loads and made some new friends..

So here is my thought….

Next time you have the option of doing something safe and comfortable, why not do the opposite ?

This Week in France

This week I am in France with my mum and my sisters family.

In fact as I write this a little girl called Florence is looking over my shoulder asking what I am doing.

And now a little boy called Humphrey has joined her !! 🙂

It’s been a bit of a busy week.

Temperatures in the mid 30’s made work during the day next to impossible.

Despite this I have got one of the bedrooms in the holiday rental up and running, along with the associated en-suite bathroom.

Of course you know me so almost the first thing I got working was the internet connection into the bedroom..

And today I have been putting lights into the utility room.

Tomorrow I will be taking some old lights I found in a junk shop and just refurbished, and putting them up out outside on the back of the house.

In between all this I have been managing the builders.

They are a pretty good bunch but they do need managing.

So I am applying how I manage myself to them, just to keep them on track.

The principle I am  applying is..

Do the BIG STUFF first then do the detail later !