Team Get-Together at the London Lunch

Had the whole Sarah Staar Business School support team together at the London Lunch.

We had a real blast, not just at the London Lunch but also the night before when we all went out for a team dinner.

Angela from the US

And me..
You know, it’s really great to see people who are valued members of my team enjoying themselves and growing through what they are doing.

Have a look at this video on my blog, in the video I explain how I discover new affiliate marketing techniques.

Go to the video now 🙂

If you want to discover the strategies that the most successful Internet marketers are using right now you need to see this video.

USA Road TripSo late next week I am off to the USA for a road trip, a road trip with a difference.Its with my mother. We are going to be landing in Chicago and going on from there to Iowa.

Because it’s where my Great Aunt lives…..How she got there from the UK is a story I will keep for another day, but it’s not the first time I have visited her.

Now Mum and I will have a few days to spare, so I was wondering…– can you suggest any cool places to go and see in or near Chicago ?  (are there any real original/authentic blues clubs with live music still around ?)(no not the tourist ones !)

– are there any good Internet Marketing meetups in or near Chicago ?

– what cool places are there to see over the border in Canada ?

New ProductsI’m thinking about creating some new products in the $200 to $500 range and was discussing this at the London lunch last week.

And then I had an idea, why not ask you guys and girls what you thought ?And specifically what sorts of things you were interested in…

So what interests you the most. Is it……

Below is a link to a quick survey.

Please help by letting me know what you’re interested in:-)

This isn’t the start of a hidden sales programme or something crazy like that.

I really want to know, and, yes, your opinions are important to me.

There was a very good BBC documentary a while ago called “The Town that took on the Taxman”.You can find numerous versions of it on YouTube and also on the BBC iplayer.

Dave has been busy working on a similar structure for Sarah Staar Business School and if you haven’t heard from him for a while, it’s been because he’s been going through a process of agreeing our accounts with the US tax authorities.

If you want to know how to avoid paying tax in either the US or the UK, or both, then Dave is thinking about running a special webinar at the end of October just to introduce you to the principles.

What Dave has put together is appropriate for anyone who creates their own products, and especially where the products are knowledge-based products.

It’s totally legal and ethical. And it puts you on the same tax footing as most multi-nationals, including Starbucks, Apple, and VolkswagenAudi Group.

Well I hate to admit it but yes it’s true, I am a great fan of the James Bond movies. 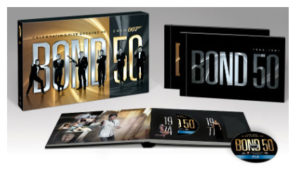 Dave teases me that all I need now is a white cat sitting on my lap..

Every James Bond film ever released, with all the old ones digitally remastered into the Blu-ray format.

And for the past six months I’ve been systematically working my way through all of the films. Two nights ago I finally reached the last movie in the series – Spectre..I really enjoyed watching it, the script was well written, and the film was very well directed.

I think Spectre brilliantly closes a lot of open loops that had been opened in previous films over the years.  I really enjoyed it and I think it breaks new ground for a James Bond film.

Definitely worth watching, but make sure you watch the other two films in the sequence first…Quantum of Solace  Skyfall

Which is my favourite Bond films??  Who was the best Bond??

I think I’ll leave that for another newsletter.