Last Thursday I went on my first continental road trip in my new Tesla. My plan was to take the Channel Tunnel to France and then drive the remaining 300 miles to the house(s) in Normandie.

My plan was to see how well the Tesla supercharger network worked in France. Dave was a bit sceptical with regards to whether I would make it to the house without running out of power!!!

I stopped three times in total to charge.  First in Folkestone, in the Channel Tunnel car park, which was a good use of the 20 minutes time I had to wait for my train.

I also charged for 20 minutes at, Rouen and Caen. The best part is it’s free to charge your car using the Tesla superchargers!!  And when I arrived at the house I still had 60% charge left!!

Last week at the London Meetup Martin Avis was asking if I had a home charger at the house in France.  Well the answer to that question is “No I don’t”.  This is because I signed up to a French charging network called Kiwhi.

Now the cool thing is 20 miles away at my local city Saint Lo, Kiwhihave a free (yes FREE) to use quick charger at the local Nissan garage.

It was a bit strange rocking up to the local Nissan dealership in my Tesla to charge my car!!

Now you need to remember Saint Lo is a very small city in France,so I thought I would be the only electric car owner in town!!

Turned out to be an assumption that was less than accurate !

The key thing though is this.

If I was driving a regular car I would have paid 600 miles round trip worth of fuel.

Driving an electric car – no fuel costs at all.

Saturday afternoon I was hard at work doing some decorating and general DIY work in the new house next door.

Dave and I were trying to work out where to put the new lights on the ceiling in the games room.

This is a huge 60 square metre room,645 square feet,  it’s in the middle of being renovated so has a just a bare concrete floor.

Saturday afternoon I was standing on a plastic chair marking out on the ceiling where the lights were going to go,  you can kind of guess what happened…

Luckily Dave was there to help me up.  We realised that we didn’t have any painkillers in the house and it was 4:30 in the afternoon on a Saturday. In France everything closes at 5 p.m. on Saturday!!

Dave helped me into his Jaguar and Dave drove at very high speed to the local town where there was a pharmacy.

The pharmacist there was brilliant, and spoke pretty good English as well, she not only supplied me with Ibuprofen but also fitted me out with a sling for my arm and a support bandage for my ankle. 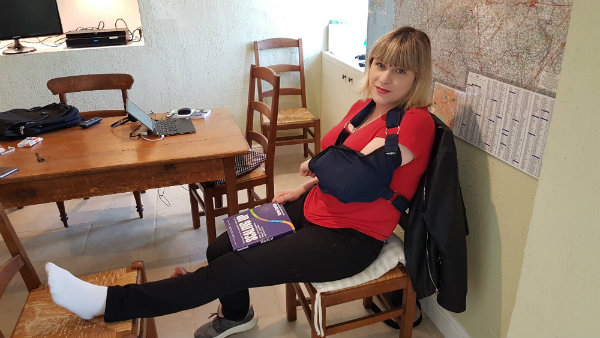 Last month’s I spent a week in Phoenix Arizona at ICON. During the week I spoke to loads of people and discovered lots of new tools and software products, some free and some premium.

Slack has the same functionality as Skype except it does a much better job of saving the chat history. It also has a very good search function.

Me and the team here at Sarah Staar Business School have been using it for a week now and I am a complete convert!!

The story of Ray Kroc, a salesman who turned two brothers’ innovative fast food eatery, McDonald’s, into one of the biggest restaurant businesses in the world with a combination of ambition, persistence, and ruthlessness.

I found this movie very interesting because I used to work in Mcdonalds back when I was a student!!  It is a fascinating business story of how Ray Kroc turned a failing franchise business into the biggest restaurant empire in the world!!

A fascinating insight into, systems, thinking outside of the box, and how to build an empire, a MUST SEE!!