We have a new arrival in the Sarah Staar household and her name is Alexa. I’ve been telling Dave for the last month that on 28 September things were going to change!

At 3:30 PM yesterday afternoon the postman knocked on the door and handed me a parcel.

I opened the box and unpacked Alexa…

Alexa is Amazon’s latest product it’s an artificial intelligence product called Echo.  You plug it in and then it responds to voice commands and can do various different things for you, oh yes and it also replies back…

“Alexa, How many teaspoons are in a tablespoon”

“Alexa, What’s on my calendar tomorrow”

“Alexa, Play me some jazz music”

This sort of reminds of when I was an eight year old child and had just watched the film “2001 a Space Odyssey”. I remember wishing I had an artificial intelligence device like HAL the computer on the spacecraft.

So when I heard that Amazon was releasing an artificial intelligence device called Echo I had to order one.

Okay so it’s not perfect, There are lots of commands it doesn’t understand such as complex questions. I guess it is going to start learning and get better over time.

I have a very strong feeling this is the start of something revolutionary in everybody’s life.

While very much a first stage product, you can still see the potential here.

I do have one thing that worries me slightly..

I’m currently watching 2 TV shows at the moment, Battlestar Galactica this is a TV show where artificial intelligence and robots have taken over a world.

And of course HAL goes sort of insane in 2001

Dave teases me about what will happen when all the Alexas link together.

He keeps referencing Skynet (from the Terminator movies) and Transcendence.

I did ask Alexa this morning if she intends to take over the world and kill all humans, she kind of skated around the subject and didn’t give me a straight answer! 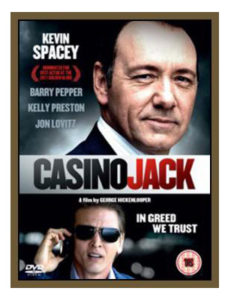 I saw quite an interesting film last night called Casino Jack. An amazing performance from Kevin Spacey. This film is a true story about Powerful Washington lobbyist Jack Abramoff.

It’s a story about corruption, power and money. The film kind of reminded me of Wolf of Wall Street. It’s a real eye-opener to how the American political system works…

I just got an email from Martin Avis to tell me that there is still a couple of places left for tomorrow’s London lunch. I’ll be there so if you want to meet up book your place below.

Have a wonderful day whatever you’re doing,