They are scrapping the President..

This is to do with HMS President. 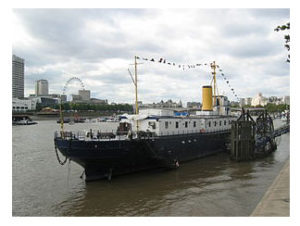 HMS President is a ship that was moored near Tower Bridge and St Katherine’s docks.

There has been an HMS President in the Royal Navy since the first ship of that name was captured from the French in 1806, and from the Americans in 1812 !

The name has been used by the Royal Navy for over 200 years.

The current HMS President was built as an anti-submarine corvette for the First World War and was built in Scotland, on the river Clyde, in 1918.

Moored in the Thames since 1922 HMS President was used as a naval reserve training ship until she was sold in 1988, and has been used as a base for events and conferences since then, including Internet Marketing workshops.

The ship needs quite a bit of work doing to it, otherwise it will have to be scrapped.

The Lottery Fund has turned down an appeal. – twice

HMS President is the last ship to survive from the First World War.

Once scrapped, a name that has been on a ship in Her Majesty’s Navy for over 200 years will disappear.

And of course HMS President will be scrapped 2 years before making her centenary.

Why am I telling you this ?

Because I almost hired HMS President as a regular venue for my London Meet-up !!

Sign this petition to save this ship from the scrap yard!!!

Flying to the USA today !!

So today Mum and I head off to the Windy City, on the first stage of our US road trip to visit relatives.

Now I say Windy City with my fingers crossed.

Because the plane is going to go somewhere near the path of Hurricane Nicole – the latest tropical storm to flare up.

– extra movies for tablet – check (in case the training videos really do send me off to sleep!)

And guess what I else I have bought for the trip ?.

Yes I have succumbed…..

I bought a selfy stick … going to use it to film some videos in Chicago with my phone.

I filmed a test video using my phone last week and was amazed by the quality check out the video here.

This is something I am going to experiment with more over the next few weeks.

Okay so I am going to be in the USA for the next 2 weeks so before I go I wanted to give you 1 absolutely last chance to watch the replay of last weeks webinar How to Find High Paying Affiliate Offers  and Promote Them on Facebook and YouTube. 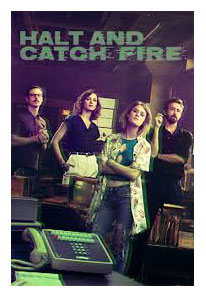 This is a TV show about the early days computing.  it’s the story about two very small companies that started up producing video games for the Commodore 64.

Halt And Catch Fire follows the story of how they started off producing video games and then diverged into online chat rooms.

As an Internet marketer I’m always fascinated about how things like the Internet came about and what people were doing online before the Internet!

Halt and catch fire is available on Amazon Prime, definitely worth watching if you’re an Internet marketer.

I’m only up to episode 5 of season three but already I’m hooked. Season 3 is set in 1985. It is the story of how the Internet came about and the expansion of social media, this was all before the Internet!!

A bit of a warning Halt and Catch Fire can be incredibly addictive, several people who I have recommended the show to have sat down and watched an entire season in one sitting I’m not mentioning any names , Kathy….