Living in France has many benefits…

The wide open space and a huge French farmhouse that Dave and I seem to
rattle around in.

However, for the past seven months, Dave and I have been sharing an
office.

This has worked out fine except for when I want to record videos or do
webinars.

I also like to dictate a lot of my emails and copywriting and this doesn’t
work so well when Dave’s on the phone.

On Saturday morning, Dave and I set about repainting a room which we had
been using for storage.

On Sunday I installed electric underfloor heating and then recarpeted the
room.

The only problem I had was hooking up the computer/ethernet cable, into
the room.

It was all going so well.

Dave and I lifted up all the floorboards…

We then pulled a network cable up from downstairs through a tiny void
where the power cable’s are rooted upstairs.

I used a use a pull string to pull the network cable through from
downstairs.

We then fished the cable through all the joists and through into the spare
room.

I installed a network socket’s on the wall and a network plug at the other
end on the cable and plugged it into the router.

However, when I tested it, it didn’t work.

I even tried my network cable testing device and this reported that the
cable was fine.

In other words, all the pins were in the correct order and the cable
wasn’t broken.

I scratched my head and couldn’t work out why it was not working.

I then did a bit of research online…

I found out it was because sometimes power cables can cause interference
with computer network cables.

The only way to get a cable from downstairs to upstairs is through a small
opening under the floorboards where all the power cables reside.

So at the moment I’ve got a network extension cable taped down to the hall
floor and going down the stairs.

This is going to work as a temporary measure.

For a long time solution, we’re going to have to drill a hole in the
outside wall and fish a cable down through to our kitchen.

This is fine except that the walls here are about 3 metres / 11 feet feet
thick!!

So, I’m going to get one in England when I returned in a couple of weeks
time.

But it just goes to show that sometimes you shouldn’t give up.

I felt like throwing in the towel on Monday afternoon when everything I
had tried didn’t work.

But with a little bit of research, I actually discovered the cause of my
problem…

My office is set up and I’m sure I’m going to be a lot more productive now
I’ve got a beautiful office to work from.

When I first started internet marketing, I tried loads of things, but
nothing seemed to work.

I remember wanting to throw in the towel when an advertising campaign
hadn’t worked at all.

I almost gave up.

Wow, I’m so glad I didn’t give up internet marketing because eventually I
found great success as I’m sure you’re all aware.

In fact, one of my biggest successes has been building an email list.

That’s the equivalent of less than $43 a month!

You CAN make BIG money online from tiny small lists..

And you can do that too….

Must go now, as I’ve still got some organisation to do in my office,
unpacking boxes, setting up a desk, hooking up my computer.

I’m expecting a second desk, which is going to be delivered on Friday.

I’ll send you a photo of my new office setup at the end of the week, so
look out for the email..

Have a wonderful day whatever you’re doing, 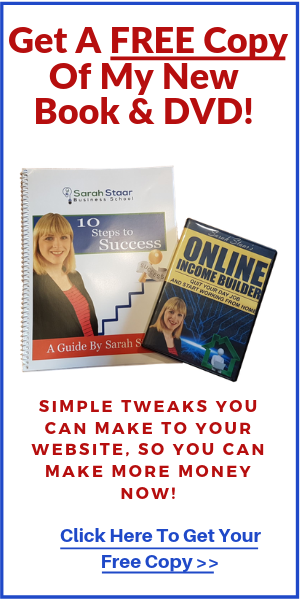