I was standing in the pouring rain. It was freezing cold, and I was in central London. I was analysing a rather alarmingly large crack, which had appeared in my Tesla’s windscreen. 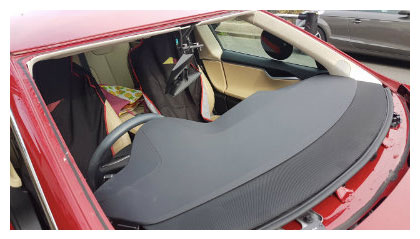 This meant that I couldn’t drive my car as it’s illegal to drive with a large crack in your windscreen, so I had to arrange for my windscreen to be replaced while I was still in London.

After a quick call to my insurance company, I discovered that they would pay for the whole thing and should be able to get my windscreen replaced the very same day.

However, I quickly discovered that when you own a car like a Tesla things take a little bit longer and tend to be a bit more complicated as most windscreen companies don’t have Tesla windscreens in stock.
The insurance company told me to phone up Auto Glass, a windscreen repair company, and get them to come out and repair the windscreen.

That’s exactly what I did.

After spending half an hour on the phone to Auto Glass, they informed me that they didn’t actually have a Tesla windscreen in stock and would have to get back to me later in the day.

Guess what? They never called me back.

Don’t you just hate it when that happens.

The next day, I called them back. Guess what?

After spending over an hour on the phone they informed me that someone would have to get back to me in the next few days. I was outraged.

Then, the weirdest thing happened.

The next day, I received an email telling me that my appointment had been arranged, and they were coming to fit my new windscreen at 11 A.M!

Bizarre since I’d never actually made an appointment.

Auto Glass showed up at 11 A.M. and proceeded to replace my windscreen. I was amazed that one guy could actually do the job himself.

However, it did take him over two hours to replace the windscreen but there was a problem.

My car has a neat feature called autopilot. Basically, the car will drive itself whilst on fast roads such as motorways or highways.

To do this, it uses sensors and video cameras, which are placed all over the car, including the windscreen.

The windscreen repair guy told me that he could not recalibrate the system as this is something that Tesla had to do and it might cost up to £800 to get this done.

I checked on the Tesla forum, and somebody told me that the autopilot system is a self-calibrating system.

Basically, it learns from your driving! After about 100 miles, the autopilot should work again.

On my way back to France, I tried the autopilot out, and sure enough, it wasn’t working properly. The car was swerving way too far to the right, almost driving on the white line.

However, after about 100 miles of manual driving, the car had recalibrated itself and learned from my driving, and the autopilot actually worked like it used to.

Pretty incredible when you think we now have learning computers in our cars. I guess it’s a form of artificial intelligence.

Now, the interesting thing is that it’s not just cars that use artificial intelligence.

Believe it or not, advertising platforms such as Google and YouTube advertising also use artificial intelligence.

Not many people know this

For the past 10 years, I’ve been getting the majority of my traffic from YouTube.

I’ve recently detailed everything I know about YouTube advertising and put it into a brand new course called Video Hacker Pro.

The best thing about YouTube advertising is Google has invested huge sums of money in artificial intelligence.

And guess what…
We can use that system to get traffic to our website.
Click here to find out more 🙂

Book I Am Reading This Week
Elon Musk:
Tesla, SpaceX, and the Quest for a Fantastic Future
This week I’ve been rereading the Elon Musk book.
This is the second time I’ve read this book, and it gives a detailed history of how Elon Musk got started and the companies he’s formed.

It gives me great inspiration to read about somebody who worked so hard and has such amazing visions.
Nearly every single business idea Elon Musk has ever had, people have told him, “It can’t be done. It’s impossible.”

Guess what? He’s proved them wrong. He’s made it work. This is why I find this book really inspirational, and gives me the drive to carry on building my business.
Definitely worth reading if you want the inspiration and drive to be successful online.

Must go now as I’ve got a tonne of stuff to do. After reading Elon Musk’s book I feel that I haven’t been working hard enough, and I need to put more hours in my business to become even more successful.