This week I’m on a road trip testing a brand-new electric car The Tesla model S.

I’m taking a road trip all the way from London to Scotland only using the free Tesla superchargers. 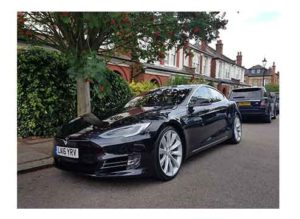 I collected the car yesterday from the dealership and so far I’ve been incredibly impressed.

It was kind of weird having the car drive itself,  Including steering,  around the M25 yesterday.

My first stop was Martin Avis’s  house in Sidcup.  I showed the car to Martin and his wife and took Martin for a test drive and decided to record an Internet marketing interview with Martin in the car.

Meanwhile in South London my mother, sister and brother-in-law + the children were all eagerly awaiting me to arrive so they could have a test drive too!!

The kids absolutely loved the car and insisted that I call the car kit after the Knight Rider TV show!!

The one thing that is a little disconcerting and everybody seems to agree with me on this is the sheer acceleration of the car I think the expression most people have used is holy cra******.  to be honest I’ve never felt anything like it before even in high performance sports cars!! 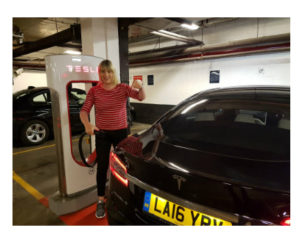 It turned out to be a bit of a mission because we took a wrong turn at St Katherine’s Dock and ended up going over a very narrow Bridge which had two bollards either side of the car the car.

The car was only millimetres away from hitting the bollards on each side.

It took us about 15 minutes of inching left and right to get through. Meanwhile a large group of young men had decided to start filming me driving through this narrow gap on their phones.

I guess they thought it would make a great YouTube clip if I scraped  the side of this expensive brand new Tesla.

Anyway we got through Ok in the end!!

Its 7.30am now and i am just getting ready to have breakfast and leave my mother’s house for my journey to Scotland. Later today I’m visiting Michael Wilding in Peterborough.

I’ll keep you updated with my progress.