This is a story about how I set out to do an interview with Michael Wilding and ended up driving around most of Cambridgeshire and South Yorkshire instead.This is also a story about the 6 Ps.

And it’s also about how a Road Trip can become an Adventure.

And the interesting people you meet in the unlikeliest of places.

So I left my mum’s house in South London and set off (in the fully charged Tesla) to Michael Wilding up in Peterborough.

The first thing was that the SatNav took me north via the shortest route – the Woolwich ferry !!

The second thing was that I got into a huge traffic jam on the A1M so I didn’t bother to charge the car at the Baldock supercharger, because I wanted to get to Michael’s house on time.

And that is where things started to unravel..

The next supercharger was at a regular service station, but the service station was completely packed – it was after all a Friday afternoon in August on the A1(M)…..

And I couldn’t actually find the supercharger !!

So I got to Michael’s house with only 50 miles charge left !!

Now, charging the car at Michael’s house wasn’t an option because I need to get on the road and up to Scotland today…(this evening actually)

And  if you plug the car into a home domestic plug socket it will take around two days to charge!

I knew that they weren’t any Tesla superchargers within 100 miles of Michael’s house  but that didn’t bother me because there are loads of regular High Power chargers at service stations and supermarket car parks, aren’t there ??

Michael and I set off to try and find a charger somewhere,  within 50 miles range,  of his house. 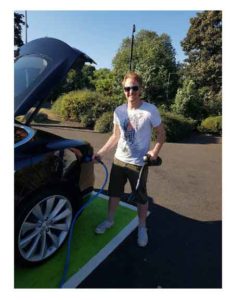 The readout said it was going to take 17 hours to charge the car!!!

Forget that!!!  we need to find something with more power!!

We got out of the car and asked one of the sales staff if he knew where it was.

He looks kind of confused and then goes to find his manager.

It turned out no-one had ever used the charging point before and it had loads of cars parked up right next to it, so we couldn’t use It.

However the entire sales team from Toyota were very interested in the car.

A few even got inside the car and had a good look at it….

We spent around 45 minutes fiddling around with the charger trying to get it to work  but it kept coming up with an error message.

Later we come to the conclusion that the charger only works for Nissan cars.- despite the adapter.

Michael, being bored by now and internet savvy, finds a really cool app called zap-map.  With this app you can organise your search results by the power of the charger.

We finally find a high power charger and gave the car 30 mins of charge. Sigh of relief !!

By  this time I was  getting a bit embarrassed and I realise that Michael had to get home.

I drive Michael home, and by the way Michael’s home is really fabulous.

On the way there I did finally interview Michael..

He gave some really good tips and insights on how he drives the right sort of traffic to his offers.

And I will upload the video tomorrow (after a good nights rest ! boy, today has been exhausting !)

SO CHECK OUT MY BLOG TOMORROW

I’m now sitting  in a coffee shop 20 miles up the road waiting for the car to charge. I reckon it’s going to take a couple of hours before and going to be on my way…

Because these chargers only give you 30 minutes at a time…. Aarrgghhhh !!

When the car’s topped up I’ve got a hundred mile journey up north to my hotel.

Luckily there’s a Tesla supercharger in the hotel car park allegedly.. And if someone else hasn’t pinched it.

I guess it’s going to be a late night….. 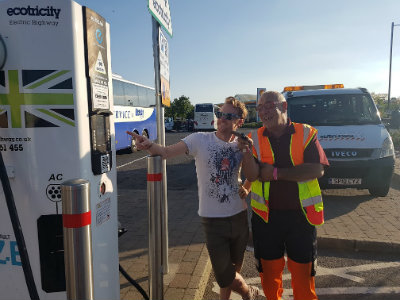 Anyway I met some interesting people along the way, like the breakdown man with a load of the most hilarious stories I have ever heard.

I am discovering that’s what a road trip is all about.

Meeting interesting people swapping stories and getting into Adventures.