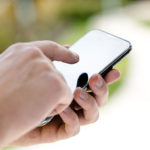 Life can be a bit funny sometimes.. intellectually you know    .just living has its ups and downs, the good moments and the    .bad, and often the bad straight after the good.

We all know that life is not one generally positive level, but for   me being a “glass half full” sort of person I feel that it is, well,    .just generally good…. all the time.

And then something happens that reminds you that life isnt really like that.

And that events (and companies) seem to conspire to make life less good than it could be.

So there I was in France last week. Supervising a builder doing the last bits of work in the kitchen, dining room, and living room.

And everything was going swimmingly. The “to do” list of minor but annoying bits to finish off was being worked through at a rapid rate.

The builder was easy to get on with and good at his job. The sun was shining and I was able to eat on the outside back patio..

I dropped my phone.

So the screen broke.

And being a touch screen nothing worked…

Now I use my phone a lot.. not for texting or email.. but as a mobile video device, so that really really hurts.

“Oh well” I said, “its old and needed replacing anyway”

So I get back to the UK and order a new Samsung Galaxy Mega to replace the old one.

I like the Mega because, as it says on the box, it has a large screen.

Which is great for watching IM videos when stuck in a line anywhere.

So the new phone arrived.

The screen is smaller than my old phone!!!

You muppets ! The whole point of the Mega is it has a big screen for watching video !

So, this is for those of you for whom life seems to be more bad days than good days.

So I just want to say It was really nice to meet up with so many customers at the London Lunch last Friday, I am just sorry that I couldn’t spend a huge amount of time with each of you, but more of that later..

One of the things a lot of you mentioned was how difficult you were finding it to sort the good tools from the bad tools.

And by tool I mean software products and processes that you can use in your business.

So one thing I am doing NOW is starting a separate newsletter which I will sending out every Monday which reviews the best ( and the worst) of the products that cross my desk.

Now I wont be reviewing every IM product – that would take forever – just ones that I could potentially see being of use, or that are so bad and so scammy you need to be warned !!

So look out for the emails every Monday.

Make sure they don’t go into your SPAM folder in your email..

Why not create a folder.. call it something like “Sarah’s useful stuff” !

And the review will be a video review, and I will have a copy of the product and be including screen shots etc.

Check here for the review I did last week on a Facebook plug in..

This evening I am going to see the latest Fast and Furious, partly because Dave likes fast cars but also to see the last appearance in the F & F series of Paul Walker.

Paul walker died,ironically and tragically, in a car accident where he was a passenger.

On a lighter note, I now have the complete set of Pam Grier “Foxy” movies

Coffy is nearly always quoted as a breakthrough movie. even though it is only a B movie Certainly without it Tarantino wouldn’t have shot Jacky Brown !

Is It Down Right Now