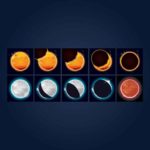 Last weekend Dave and I went over to France to see the    .house, check on the builders (and pay some cash) and also    .to see the Lunar eclipse.. well not me but Dave…

The sun was shining, the sky was blue with not a cloud in    .sight, and the house refurbishment was coming on nicely.

Because we live way out in the country there is no light pollution and the solar eclipse was really visible, Wow! it was a pretty amazing site seeing a blood red moon.

It was great to see the progress that the builders are making on the house and our barn conversion. So far everything is going to plan and hopefully the house should be finished before next summer.

Yesterday was a beautiful morning so we sat out on our patio and had a leisurely 2 hour long French lunch.

We packed up the car and headed off to Caen ferry port, getting there a bit early for once we boarded the ferry without any problems.

We found our cabin, offloaded our luggage, and then had a nice early dinner in the restaurant. After about an hour and a half we realise that the ship was not moving?

Then around 30 minutes later there was an announcement over the tannoy saying that there was going to be a slight delay due to industrial action!!

Several tannoy announcements later, the captain informed everybody that the ferry had now been cancelled due to industrial action, in other words a strike!!

It then took an absolute age before we could even leave the ferry and unload our car.

Dave managed to switch the booking and get another ferry from Le Havre.

We ended up having to drive all the way to Le Havre, about an hour and a half’s drive to catch a different ferry, a night crossing. Leaving at 10.45 and arriving in Portsmouth on Tuesday morning at 5.45 !

We had to wait around three hours before boarding the next ferry.

This didn’t really bother me as I always carry with me a ton of videos and e-books on a USB stick and on an SD card that sits inside my phone.

We did manage to get a cabin so we both end up getting a few hours sleep….

Around five years ago I once got stuck in an airport for 18 hours. It was a very boring 18 hours I had nothing to do and could not even get an Internet connection!

Since then I’ve always made sure that I’ve got plenty of things that I can watch on my mobile phone or laptop even without an Internet connection.

So I put together a folder which contains :

This is a great get-out-of-jail-free card whenever you find yourself stuck in an airport or ferry port with a lot of time on your hands…..