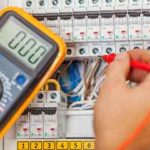 Last week was pretty cold and wet but nevertheless as it was   half-term I decided to spend last week with my family at the      .house in France.

I collected my mother from the airport in the morning,my    .sister her husband and kids arrived later the same day.

I was cooking dinner and suddenly all the power in the house cut out.

Was it a power cut or something more serious ??

After a bit of investigation- and following the smell of burning plastic- turned out something had gone wrong with the fuse box  – so the power would not turn back on!!

However there was power in the new house next door (which is still a building site by the way) and without much of a problem I and the “team” ran two extension cables into the house to set up limited power and temporary lighting.

Having a log burning stove in the lounge, we loaded it up, put it on high and  – much to my surprise – this was enough to heat the entire house!!

I phoned up one of my builders and asked if he could get his electrician friend to come out and have a look at our fuse box.

I spoke to the electrician but unfortunately he wasn’t able to come out till 9 am the next morning.

The following morning he arrived an hour and a half late. He  took one look at the fuse box and said I can fix that no problem.

He then disappeared off for 45 minutes next door to have a cup of coffee and a chat with two of his mates who were doing some work on the house next door!!!

I was not impressed….

Finally he set to work on the fuse box and had it up and running again in half an hour. What a relief. He ended up charging me almost €400!  The part that had blown in the fuse box, an RCD, cost €100 . (according to him)

To be honest I was that  pleased to get the power back on  – with the familly and kids there – that I paid him in cash and sent him on his way.

Later that day I was in the DIY shop and noticed that they sold the same part in my fuse box that been replaced earlier that day. I checked the model number and it was the same however it only cost €48!!

Yes I’d been ripped off!!!   kind of shortsighted of him really. If he had done a good job I would have hired him to redo the electrics next door In the new house…

The fact that he was recommended by one of my builders has also made me lose confidence with that particular builder….

On Saturday morning I was browsing through Amazon prime and found a brand-new TV show called Mr Robot.

It sounded fairly interesting as it was about computer hacking. I sat down to watch the first episode and before I realised I had watched five hours worth!!

This is one of the best TV shows I have seen since Breaking Bad… I ended up watching the entire series on Saturday and Sunday!!!

The series is about a young, anti-social, computer programmer Elliot who works as a cyber-security engineer during the day, but at night he is a vigilante hacker.

He is recruited by the mysterious leader of an underground group of hackers to join their organization. Elliot’s task? Help bring down corporate America.

The thing that intrigued me about this show was the accuracy of what they were actually doing on the computers.

So often when you watch TV shows or films and they show stupid bleeping computer screens with completely fake graphics!!!  I hate that….

Mr Robot is one of the most accurate representations of hacking I have ever seen!!  It is also incredibly entertaining but very addictive….